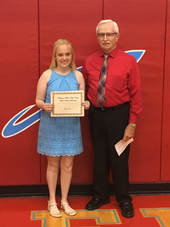 
Kayli Long of Ridgedale is the daughter of Mr. and Mrs. Robert Long of Marion, Ohio.  She graduated from Ridgedale with a 3.94 gpa and will attend Wilmington College to major in agriculture education. Her goal is to become a vocational agriculture teacher and FFA Advisor. At Ridgedale, she was president of the FFA, president of the senior class, president of the student council, president of Leo club,in the National Honor Society, and on the bowling team, art club, chess club and Spanish club. Kayli served as the 2018 Marion County Junior Fair Queen and was member of the Junior Fair Board. She placed 6th in the State FFA public speaking contest where she was also a State FFA Degree recipient.

Mercedes Smith is the daughter of Mr. and Mrs. Keith Smith of Waldo, Ohio. She graduated from River Valley with a 3.96 gpa and has applied to several colleges to major in education. Mercedes ranked first in her class of 144 students and was active in musicals, show choir, volleyball, teen institute, tennis, academic challenge, and FCA. She served as treasurer of National Honor Society, was in the Otterbein honors choir, Harry Alexander music festival, and placed 2nd in the OSUM math competition.

Emily Butz is the daughter of Amy Butz and the late John Butz of Marion, Ohio. She graduated from River Valley with a 3.5 gpa and will attend either Ken State, Otterbein, or Capital University. majoring in music education. She has been active in concert band, marching band, jazz band, show choir, and the Harry Alexander music festival. Emily was on the broadcasting team, in VEX robotics and participated in the National Robotics Challenge. She has also been active in the Mansfield Symphony Youth Orchestra, The Capital University Honor Band, and the Marion Community Concert Band. 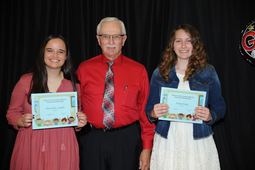 Left ; Mercedes Smith; Right: Emily Butz
The MCCARTA Scholarship
The scholarship chairman sends a letter to the school's guidance department stipulating the school is to receive the awards for two graduates going into education. Certificates are presented at a ceremony given by the school. Congratulatory letters are sent to the students and after receiving their first transcript,  checks are sent to the students to use at their discretion.